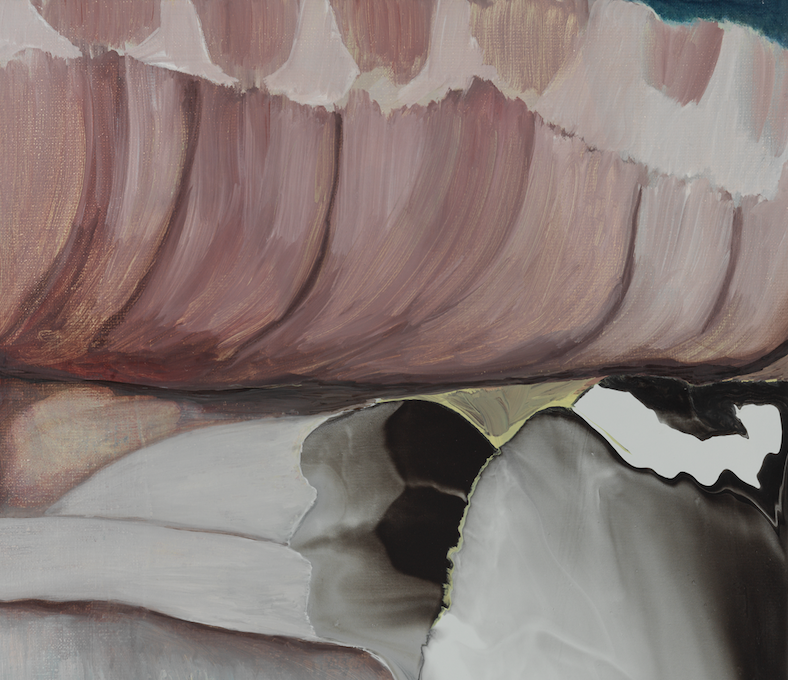 Elements of landscape, architecture, and the body meld together in the small-scale paintings of Rezi van Lankveld. Forms may look familiar but are reluctant to be identified in a singular sense; the figuration is ambivalent. Movement is key in the Dutch artist’s conception of a painting: a figure should be flexible and ready to change shape. At New York’s Petzel Gallery, Van Lankveld presents recent paintings in the exhibition Soft Sun.

Some of your paintings evoke aspects of a landscape: there are rocks, a sky with some clouds, or the slope of a hill. Do you think of landscape images when you make a painting? Do you have specific natural elements in mind?

Nature is there, but not in a direct, visible sense – more as a state of mind. The natural elements that I have in mind are abstract; they represent a movement or a certain depth. I grew up in a rural area in the east of the Netherlands, where the landscape was agricultural, with meadows, high skies, and also some forests. This spacious environment has helped form me.

Your work has a calm appearance, but it is also dynamic. It usually conveys a sense of movement, and this seems to be more important than the subject matter, the figure, or constellation that is depicted. The figuration seems ready to change its appearance. Are the motifs that you paint the result of intuitive gestures, or do you translate observations from life into the world of painting, following some sort of plan?

When I paint, I allow a lot of things to happen. I do not want to impose too much on the image as it unfolds. I do not use a sketch or anything like that in advance. A preconceived image would get in the way of my direct connection to the paint. I need the painting to keep changing once I start out, to find the right direction. In this process, I find shapes that seem uncertain about their identity. They could be this but also that – there is a dynamic quality in their appearance that I want to transmit. Often the final form of the painting comes in a flash – I see it at once. To reach that, the painting goes through a lot of stages, until the paint starts to become alive. Whereas in an illustration, the image tries to express one idea in precision, I look for the opposite, for openness and ambiguity. It is not just one thing that is depicted. It is rather a situation in movement. It is everything at the same time: figure, portrait, landscape.

Read the full interview on Curator website. The exhibition at Petzel Gallery runs till 26 March 2022.