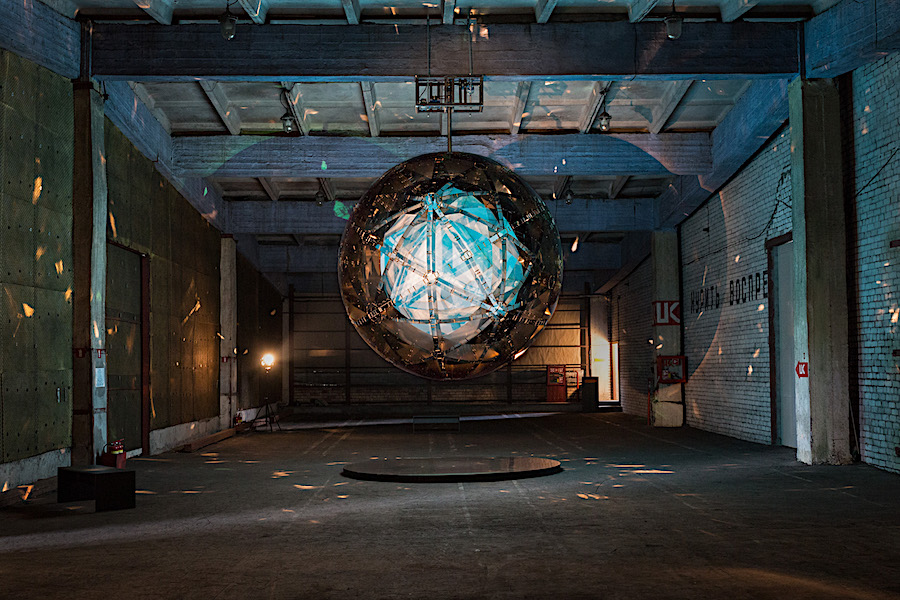 Due to the pandemic, the second edition of the Riga International Biennial of Contemporary Art (RIBOCA) opened months later than planned, and only for a short time. Covid-19 became co-author of the biennial, it says in the introductory text written by curator Rebecca Lamarche-Vadel, because works had to be adapted, but also because the perspective on art has changed. Since the pandemic, the world is no longer the same.

The curator designed a storyline about the end of the world – or rather, about the end of worlds, or eras. In doing so, she tapped into the history of the host country, Latvia, which has experienced many end times due to occupation and crisis. But also in a broader sense, she was looking for artists who convey a sense of the end times, or who feel the pulse of our remarkable, if not gloomy time. The title, and suddenly it all blossoms, therefore came somewhat out of the blue. RIBOCA 2 is a restrained, carefully composed exhibition that has its moments, but cheerful is not the right word to characterize the show. It is rather grim and dark. Seldom it reminds of spring or blossoms. Instead it has a focus on depicting change and exposing connections.

The biennial takes place in Andrejsala, a former harbor area of Riga. Entering the first hangar building you see in big colorful letters the words “LIFE TIME.” It is probably the most frivolous moment of the show. It is one of Ugo Rondinone’s Rainbow Poems that, as Lamarche-Vadel points out, “urges you to enjoy the moment, but at the same time asks what you do with the time you have been given.” In the next room, the American artist Bridget Polk is busy stacking sculptures made from pieces of stone. They are vertical, balancing works, which sometimes only remain upright for a short time. They are not meant to last. Polk is a former drug and alcohol addict who, as she remarked, found a healthy new addiction in “rock balancing” and who, by being invited to participate in RIBOCA, suddenly entered the international art scene. Her work is about being in the moment, and mixing with the material.

With this prelude, the curator sets the tone when it comes to the question of what art is. She likes to incorporate work that has not yet existed in an art context. And she seems not keen on showing work that might look like classical sculpture. It is the spirit of Duchamp, rather than Brancusi, that has guided her. Aesthetically (or also: anti-aesthetically), Polk’s work fits into the post-industrial landscape of debris, abandoned buildings, and concrete overgrown with plants. The curator sees Polk’s Sisyphian attitude as the epitome of what being an artist means: the stone is lifted up again and again, and then falls back, starting over.

More than 2000 tree trunks float in one of the harbor basins. The work Currents, by Lina Lapelyté and Mantas Petraitis, is a reminder that we are in Latvia, a country that consists more than half of forest, and where logging has been important since the Middle Ages. In the old days, logs were transported on the flow of the river. This came to an end in 1974, when a dam was built near Riga for a new hydropower plant. It is not the only work in this biennial that refers to the history of Latvia and the strong connection that the Latvians have with nature, which is also reflected in songs and poetry. Every Latvian has a home somewhere in the countryside to retire to, and in the corona lockdowns, this was appreciated even more. “Latvians know the forest like no other,” says Lamarche-Vadel. “They know every plant and its workings.” The taste and medicinal effects of plants are also discussed in the biennial.

The main location is a former harbor building, a concrete colossus where hardly any daylight penetrates. Pigeons crawl in through broken windows, and the interventions required for RIBOCA have deliberately been kept visible: the rubble from the knocked-out walls is still on the floor next to the doorways. Lamarche-Vadel does not want the exhibition to be a closed castle, but seeks a porous model that is open to society. The inhabitants of Riga appreciate that this building and this part of the city can now be re-entered; it attracts the curious, but there are also critical voices who find the post-industrial Tarkovsky atmosphere of the site depressing, and serving the cliché of the post-Soviet landscape too much.

Andrejsala is also the location where a new contemporary art museum had been planned. Rem Koolhaas’s design from 2006 had been approved by the Riga city council, but then the financial crisis kicked in, and the museum remained a dream. In Koolhaas’s design, the white-cube needs of the museum were balanced with the presence of history on this location. RIBOCA, instead, mainly focuses on the latter. The harbor building is a black box where works of art become visible in theatrical lighting. The setting recalls the ninth edition of Manifesta, which played on the post-industrial landscape in the Belgian city of Genk in 2012, and at the same time thematized it as an end time.

In terms of theory, Lamarche-Vadel was inspired by Les trois écologies of the French thinker Félix Guattari, a 1989 text that paints a dark picture of the current state of capitalism that rules us, and in which old binary contradictions, such as those between the first and third world, have given way to multipolar, difficult-to-fathom networks. “Nothing can happen before the mental ecology happens,” says Lamarche-Vadel. “First we have to understand our situation, where we place ourselves as humans.” She thereby also sketches the framework of her exhibition, and the potential that she sees in art. Change, she pictures, can only come from art.

The fact that Covid-19 presented itself as co-author of the exhibition takes revenge at times. To view the artifacts that Tomás Saraceno would have used for fossil-free travel from Berlin to Riga is informative, but does not make an exciting work of art. The dialogue that Pawel Althamer had foreseen with the audience does not show in the corona version consisting of some photocopies on the floor. Disappointingly, a number of sculptural installations (unaffected by Covid-19) are also not able to steal the show, with a few exceptions, such as the gigantic kinetic sculpture Positron by Valdis Celms. Originally designed in 1976, it was intended for a factory in Ukraine, to strengthen workers’ morale. However, it only ended up being produced now, for this biennial.

The fact that the exhibition in the main building nevertheless gains in concentration and depth is mainly due to the films. First, there is a dark and slow film by Pierre Huyghe, which microscopically zooms in on a piece of amber (abundant in Latvia) and which contains information about ancient plants and animals. Moments later, a video by Brussels-based Eva L’Hoest, The Inmost Cell, takes the viewer on a journey beneath the surface of the Western Daugava River, past underwater ruins. Here, an archeology of “an end time” is conducted with a virtual camera, in which transformations such as between waving water and grass run smoothly. Everything flows and is part of an enchanting continuum. The film Présage – SiO2, by Hicham Berrada, brings us underwater again, and we see how natural and chemical materials collect on the bottom of a glass tank, and how they react with each other. While looking at it, you get the feeling that the beauty is caused by the pollution.

In the film contributions to this biennial, you can feel how artists become fascinated and enchanted by material, and how the material world is full of life and connections – full of beauty, but also connected with politics and corruption. People play a role in this, but they certainly do not play the leading role. An interesting aspect of the exhibition is how humans are put into perspective, and how other forms of life are put in the spotlight instead. A highlight is Eglé Budvytyté’s Songs from the Compost: Mutating Bodies, Imploding Stars, in which a group of teenagers move like insects (or are they cyborgs?) through a landscape of forest and beach. In the choreography of moving bodies, the youngsters are one moment draped limply like dishcloths, while the next moment moving on all fours through the sand, with optimal body tension, like a scorpion on the beach. In previous performances, the artist had already shown her eye for the finer points of body language, and how it can tell something about politics, beliefs, and identity. And how strength and fragility are linked. In this case, man appears as one of several variants of life; you could also see the suggestion of a post-human time.

A succession of cinematic works with overlapping themes creates, throughout the biennial, the feeling of looking at a film of life, with a corresponding soundtrack. Even though they are made by different artists, the films share muted colors and subdued sounds, but each in its own way is refined, attentive, and precise. In the choice of cinematic works, an aesthetic vision unfolds, and an ode to the object and to the material world. Curiously enough, this does not not primarily happen through sculpture, but rather through this detour of film and video. Not to mention that painting, also a material medium, is fully absent in this biennial.

The film Atomic by the artist collective Honkasalo-Niemi-Virtanen tells the story of a jewel made of tritium, a material that was created as a by-product of nuclear tests. A nicely dressed, somewhat bored woman walks around with the jewel, taking in the admiration of men, and amused by the fact that people do not know what deadly beauty they are attracted to.

When it became clear that the coronavirus would prevent the planned summer-long biennial, the curator decided to make a film of the whole project. This choice surprised me at first, as it seems difficult, if not impossible, to convey in film the experience of visiting such a large-scale exhibition. Yet, considering that within the biennial, the cinematic works make the biggest impression, it could work out as a nice surprise. Lamarche-Vadel herself calls the (still to be presented) RIBOCA film an additional work – it should not be seen as a documentary that can replace the exhibition. However, it may help the survival of  an event that many eyes have missed due to Covid19.

An earlier version of this text was published in Dutch in HART magazine (Belgium) Nr. 207, 7 October 2020.