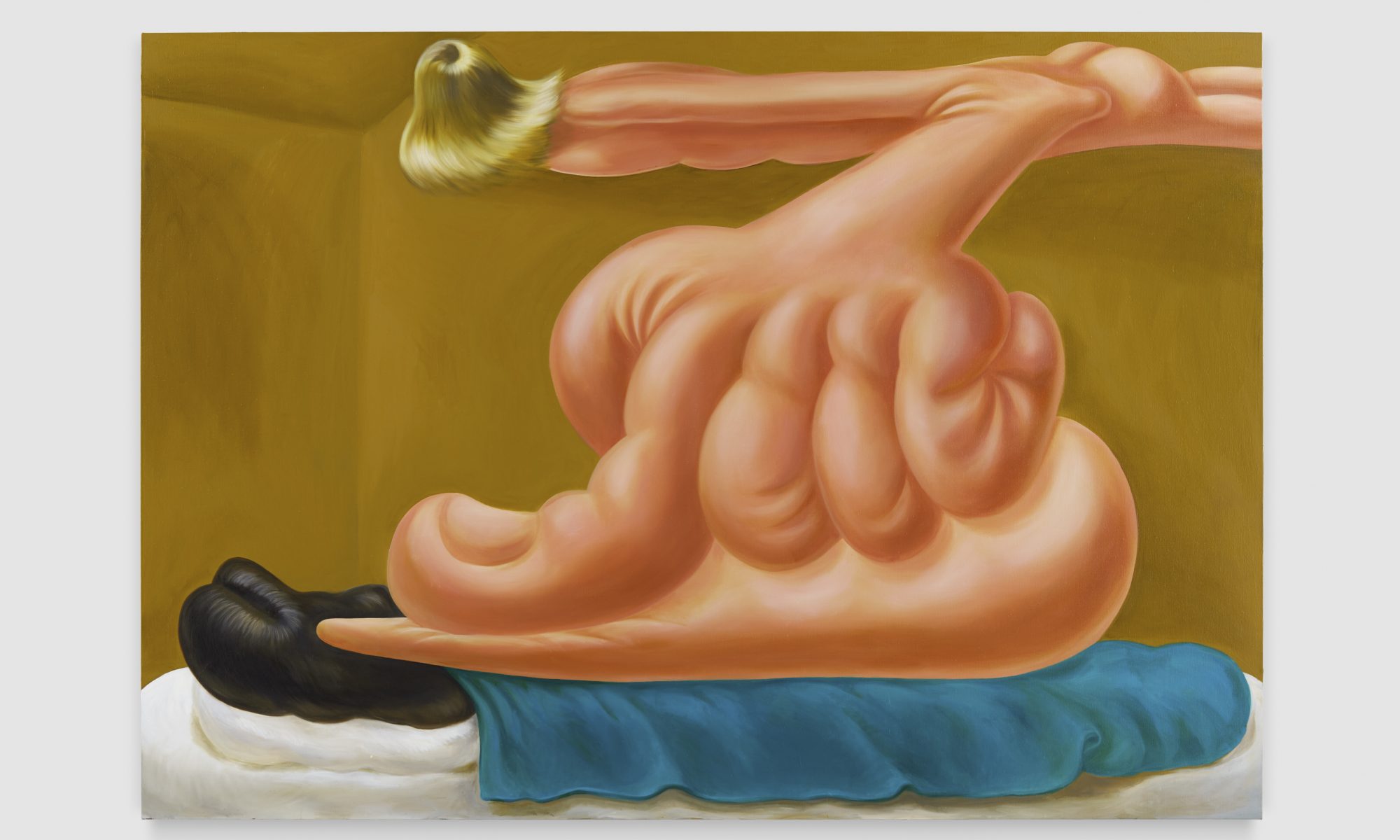 Seeing a reproduction of Louise Bonnet’s painting The Pond (2018) on the invitation to her exhibition made me both curious and skeptical. It shows a woman posing in an uncomfortable, if not impossible, back bend curve, her form conjuring a shortened bridge, with her hands and feet under water. What we mainly see is a large body against a dark background. Face and individuality are hidden behind physicality. Firm, outsize breasts point straight up toward the sky. It is certainly a weird scene—but I couldn’t decide if it was weird as in interesting, or more like a cartoon or a forgettable gag.

I got my answer from the exhibition itself, which included six large oil paintings on linen, along with five smaller, colored-pencil works on paper. Most of these works had a single body as their protagonist, stretching, bending, or hiding behind hair. These bodies were voluminous, twisted, exaggerated, or reduced to just certain parts: giant feet, a massive hand, a blown-up nose. The recurrent appearance of bare skin did not mean the figures were fully exposed; in most instances they were rather trying to hide their intimacy or were prevented from showing their real selves. The reason for this could be the pressure of the public eye or another force: In Bed shows a figure being pressed down by the enormous hand of a second figure, floating above.

Bonnet was born in Switzerland in 1970 and, after attending art school in Geneva, moved to Los Angeles in 1994. While some regard the Californian city as the epitome of superficial body culture, for Bonnet it was the opposite. She has said that as a woman she felt more at ease there, less preyed on or dominated by male eyes. Such observations on cultural habits of seeing are important to her work. Clearly, being or having a body was one of the main themes of the works on view here. In both the drawings and paintings, there was a kind of smallness and vulnerability inherent in the figures, despite their exaggerated dimensions. They were constantly being squeezed or rendered faceless.

In the works on paper, a discomfort with the body was rendered with a light touch, the white paper visible underneath the pencil lines, while in the oils something more happened, bringing further layers of expression that led to a greater degree of ambiguity. In the paintings, the impression that the artist was aiming at a twist or a quick laugh tended to disappear. Sure, the bodies in these paintings seemed absurd; they were equally comic and tragic. But the way they were painted, along with the way they were staged in isolation, rendered them ambiguous plastic shapes that invite longer contemplation: The figures generally looked smooth, plastic, and volumetric, but details such as wrinkles of the skin or the tension of the muscles were worked out precisely. They seemed sculptural: the result of a thoughtful exercise in bending curves, showing folds, creating depth, and working on surface expression.

Bonnet started to use oils only recently, in 2014, and the medium turned out to be the perfect way to attain plasticity. Her painted figures possess solidity and stillness. They are abstract in the sense that they become placeholders for forces that play out across the canvas as a whole. The shades and folds of skin in The Finger, or the tears or waving hair in The Rock, were resolved in such a subtle and beautiful way that they resembled the lovingly described surfaces of objects in a classical still life. As a result, the sensations of discomfort, disproportion, imbalance, or pressure were transformed into something paradoxically celebratory. Bonnet’s paintings are weird in a serious and monumental way.

This review was published in Artforum, February 2019. The exhibition was on view at Max Hetzler Gallery, Berlin.