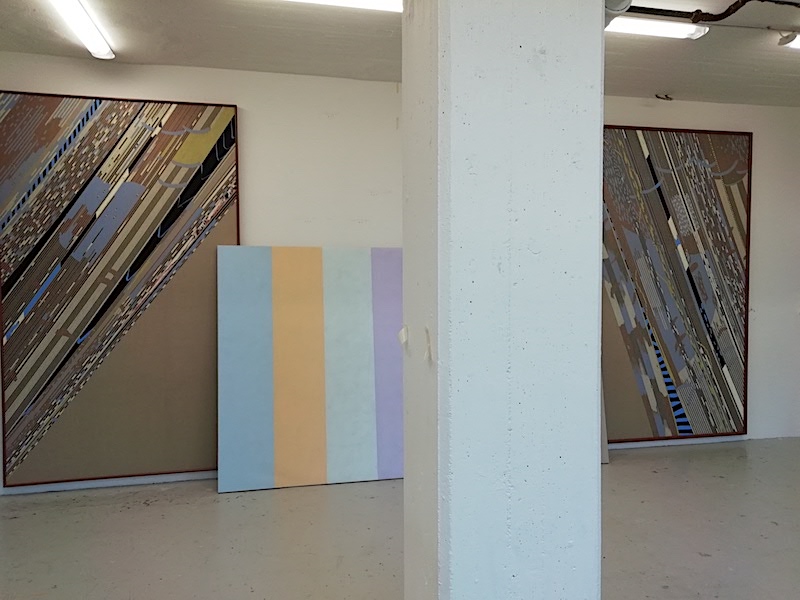 During my visit to Sweden, the artist showed me the works of her grandparents, Beth Zeeh and Ryno Frieberg, both painters whose works can be seen in their former house in the countryside. Driving there, a good hour outside of Stockholm, I watched the landscape change into gently curving meadows, farms, forests, and lakes. I became aware of the natural background of Frieberg’s works, the visual “material” the artist has seen so often, even if only subconsciously, as it was simply always there. You might wonder why she did not become a landscape painter, considering that she grew up as a country girl, playing at the lakeside, catching fish under the bridge, and seeing how animals were fed at the farm nearby. Or you could argue that she did become a landscape painter, but she did so in the age of abstraction, where the focus is not necessarily on what can be recognized as a depiction in a painting, but on what is present in terms of energy and ideas, colors and forms. Broadly speaking, and probably more correctly, we could call Frieberg a nature-based painter. Her paintings cannot really be separated from nature, just as they cannot be separated from the late 20th century in which she grew up. She went to art school in Umeå at a time when abstract and conceptual takes on art had become part of daily practice and conversation. Abstraction was neither a novelty nor the result of a reductive view on reality, but simply an existing vocabulary with its own expressive possibilities. At the same time, for Frieberg, every part of her “abstract” paintings is rooted in nature – in the color of the sky, the movement of water, the pattern of a bird’s feather.

From the essay: “Connecting to the Source,” published in the book Elisabeth Frieberg, Rhythm Nature Movement God, Kewenig Gallery, 2021.