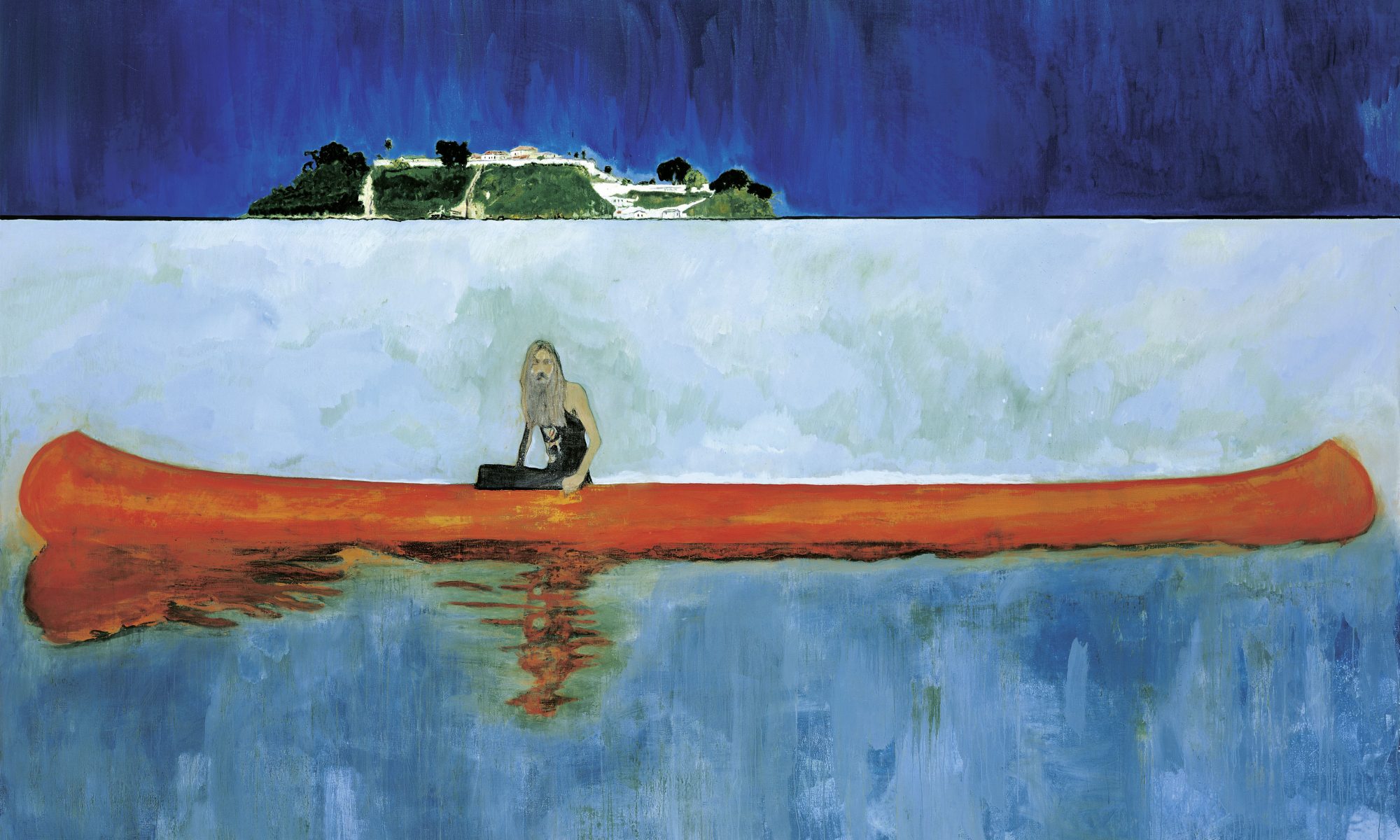 After the work of Peter Doig was exhibited in the 1990s, a lot of young painters started to paint ‘Peter Doig-like’. Apparently he had struck a chord, inspiring a new generation of artists. He legitimized a new romanticism that had been impossible, and even suspect, for years. A show in Basel brings together a selection of Doig’s works from the last 25 years, and offers a chance for the visitor to comprehend the ingredients that make up his attitude as a painter.

There are few such perfect locations in which to host a Peter Doig show as the Fondation Beyeler. The museum, situated in a rural setting just outside of Basel, is surrounded by a sculpture garden. While walking through the building there are moments when nature enters: a view of the surrounding hills or a tree that’s losing its leaves. Such impressions interfere with the exhibition in a meaningful way. They give context to the question of Doig’s relationship to nature. Does his work address what is ‘out there’ or is it, rather, a painted reality in itself, as the artist suggested in a talk at the museum: “A painting has to be convincing, in the sense that it provides a kind of escape and has a kind of reality of its own.”

Doig was born in Edinburgh, grew up in Trinidad and Canada, and studied art in London. His years spent in winter landscapes as well as in tropical ones, have informed his work. Observations from such different parts of the world can actually be seen mixed within single paintings. A recurrent motif is nature and man’s reflection on (and in) it. One can see, for instance, a single figure aside a lake, a figure in a canoe on a vast expanse of water, or somebody walking over the ice. In all cases, the reflection in the surface is important, and creates a painterly double, or extension of the figuration. According to Doig, “Reflection is a device to create space in a painting. It opens the whole thing up.” The mood of these landscapes is not only transmitted through the actual scenography and posture of the figure but also through the differences in paint application and mark making.

In Doig’s eyes, “Painting is about working your way across the surface, getting lost in it. The large size of the paintings is about getting absorbed in them.” A project made specifically for this exhibition is a long mural, Cat of 9 Tails, a collaboration with some of Doig’s students from Düsseldorf. It shows an ongoing wall of colored bricks in which different windows appear, offering a vista of the blue sea, an island, and the horizon. It’s not entirely clear whether these windows are really windows or rectangular images or paintings on the wall, and thus an illusion. As Doig says: “It’s a play on making a painting.” The mural is an extended version of his 2004 canvas called House of Pictures.

As do many contemporary painters, Doig borrows freely from art history. His appreciation of early modern artists, such as Daumier, Cezanne, Gauguin, Van Gogh, and Munch can be discerned in the way he draws silhouettes, enacts a starry night, or lightens-up white snow with pink. What is crucial is that the re-takes of these predecessors are incorporated in a new atmosphere. Unlike many of his followers, Doig succeeds in digesting his source material, resulting in a painterly language that can be experienced as current – if even in the work the sense of historic time is ambivalent. The present appreciation of Doig’s oeuvre doesn’t necessarily mean that it depicts our era; it may instead point to something that is lacking or that people are longing for at present. His paintings enable the viewer to establish a vivid connection to memories and internal landscapes.

In many ways, Doig’s work is informed by photography, as can be seen in his image archive (presented as a slide show), while in his paintings he moves away from photography and looks for expression that can only be achieved through paint. “I use photography simply as a way of imaging memory”, claims the artist. Also exhibited for the first time are the graphic works that Doig has made over the years, which often contain images he would later use for his paintings. Even though the effect of these ‘experimental prints’ is modest in comparison, it’s interesting to see the pictures in black-and-white and at a small scale. It makes one aware of the importance of contrast in the compositions – before any use of color or virtuosity comes in. Doig’s credibility as a painter has to do with layering. Many paintings balance between multiple competing forces, moods, and notions. Parts of the works are executed with an obsessive emphasis on color, while other areas are hardly touched, being more sketchy or pale. Some areas are very precisely drawn, while others seem sloppy, the result of indifferent brush strokes or dripping paint. There is the notion of skill, but there is also the understanding that art is not about mastering technique. As Doig sees it, “You can make a painting plausible by having areas of focus, and then have other areas that are completely out of focus.”

The only thing lacking in Basel is a good insight into Doig’s recent production. Apart from the mural, there’s only one work from 2014, a figure on a horse – which looks like a battlefield, in terms of figuration. This doesn’t shed any light on which direction Doig is now moving in. What the exhibition teaches us, though, is that Peter Doig is not just a style or a look, it involves an internal quest. That is what distinguishes a real Doig from his epigones, who are enchanted by the surface treatment or the romantic imagery. As he put it in an interview: “I think you have to be connected to your subject, for your own sanity, really; and, also, to feel grounded.” ‹