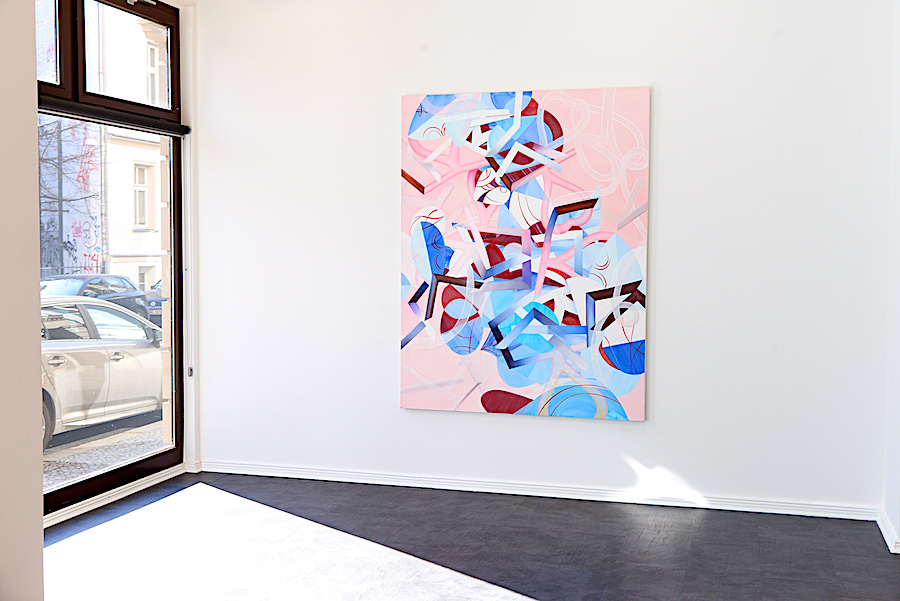 This exhibition shows the work of three female painters in their thirties. Their work alludes to an invisible counterpart, an other half that is suggested but not defined. Thus the works ask for completion in the eye and imagination of the beholder. The artists work in different styles, yet they share an interest in the play of light, shadow, and transparency of colors.

Lia Kazakou (Thessaloniki, Greece, 1980, lives in Thessaloniki) presents fragments of individuals in highly detailed, realistic painting. The framing cuts the figures and leaves out visual information about their identity, such as faces, legs, or posture. Thus the viewer has to complete the image mentally. Because of this absent overall image, there is an increased focus on the details of the garments, the uncomfortable gesture of a hand, or the ropelike texture of hair. The importance of such details, plus the dramatic lighting, give the paintings an atmosphere of suspense. The proximity of the figures, and the zoom that causes too close a view, mixes unease and suspicion with the pleasure of looking. Kazakou finished her studies in at the Aristotle University of Thessaloniki in 2004.

In the recent paintings by Rebekka Löffler (Freiburg, Germany, 1985, lives in Cologne), a network of connections appears through dynamic, colorful forms. There is a complex constellation of shapes, both angular and round, that collide, interact, and cannot be separated. The paintings could be read as metaphors for human encounters and thought patterns, or opposing forces in life. In earlier small-scale works, stage-like situations create a theatre of light. The actual action on stage is not there though; it is in the rays of light or small fragments of the whole where the drama of these paintings unfolds. Löffler received her master’s degree at the Staatliche Akademie der Bildenden Künste Karslruhein 2012, and was a resident at the HISK in Ghent in 2016-2017.

Gina Malek (Rochester, Minnesota, US, 1986, lives in New York City) returns to Magic Beans Gallery after her successful solo exhibition, Underlinins in 2016. Encounters between people are the basis of her work, with each painting showing a memory the artist shares with a loved one. A few details of the meetings are depicted, and others are withheld. Using color and gesture, she highlights the most significant moments and then folds them back into the painting. Malek’s figurative abstraction speaks to the poetics of light and form, allowing the figurative elements to bend through willpower and urgency, rather than through formal construction. In this way, her works wrestle with ideas of identity and the impermanence of memory. Malek studied painting at Indiana University Bloomington and received a master’s in fine arts at Columbia University in New York in 2015.