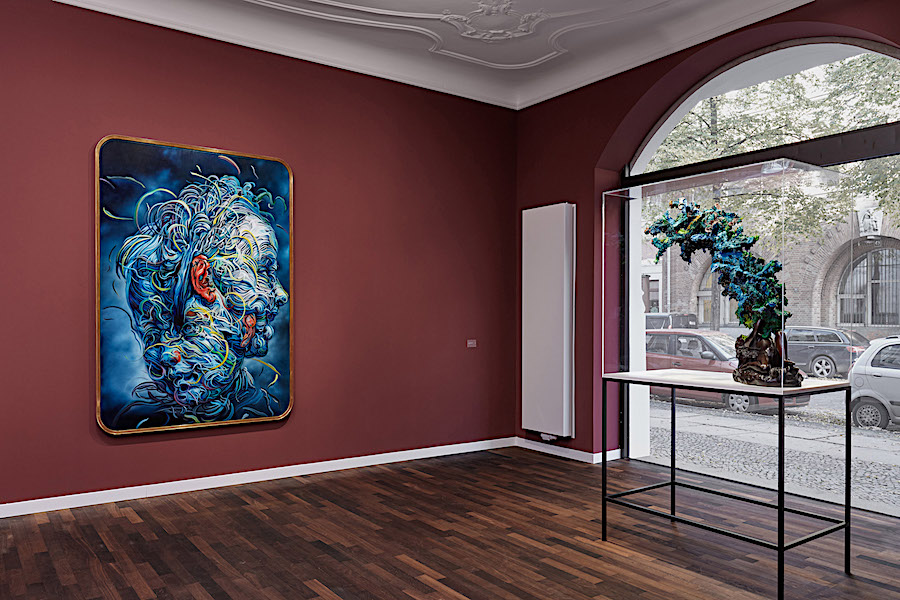 Since his appearance on the 1990’s London art scene, Glenn Brown has been in an ongoing dialogue with his predecessors, without being afraid of mutilating his examples or pushing aspects of their work to the limits through stylish deviation and exaggeration. For his exhibition And thus we existed, the artist presents 17 recent paintings that are loosely based on historical figure drawings, alongside six paint-based sculptures.

Multiple sources often come together in one painting, such as in the green Bring on the Headless Horses (2020), which projects a seated nude over a Hercules figure, intertwining them. This piece is based on works by two 17th– and 18th-century artists (Mr. Brown usually prefers not to disclose the names of his sources, unless of course they are mentioned in the title), but it also references the artist’s own previous work.

Seeing a painting by Glenn Brown is like watching a peacock opening its tail. It is full of proud beauty, carefully orchestrated colors, and within the repeating patterns there are many little “eyes” hidden in the paint, in curving lines. Sometimes they are intentionally meant as eyes, but they are often just blinking moments that draw the attention into the dense figuration, creating anchor points in what seems an overwhelming and cluttered play of lines and colors around a human figure. For the current exhibition Brown was apparently triggered by the multitude of curving, shorter and longer lines that can be found in drawings. He uses them to shape his figures, serving representation, but he also lets them shine as free-moving ornaments in a rich display of color and paint.

Seeing these works, I wondered if the artist considered a path through each of them, in terms of where to start looking, where to continue, and where to leave the painting. Some shops make customers go through their offer in just such a prescribed way. There is no way to find what you are looking for without passing a variety of other offers that call for your attention. In Brown’s case, there are many distractions to look at, and the viewer might wonder if there is a point at which everything comes together. Looking for meaning here feels like a game of a hide-and-seek, in which everything is curling and swirling, in which figures are appearing and disappearing, and the image never comes to rest.

It is interesting how different the temperaments of the individual works are – ranging from light and airy, to melancholic or tormented – while sharing the same compositional principles. Color seems to be the decisive factor here, giving each work its own pitch. Some small paintings though, like Drawing 9 (After Baselitz) (2017), stand out without (or with just a little) color, and for their dynamics, rely on the contrast between black and white, and between dense and emptier areas. The play of lines in this work is reminiscent of a detailed mountain map where differences in elevation are indicated, even though the actual image is that of a face.

There is not one way to go through the paintings – there are endless ways, and I figure that the artist conceived his work rather purposely in such a way that it is not easy to find an exit. Yet, he gives us some spots that serve well as entrances, like a single red shape against a green, forming a hand, or the blinking eyes that pull attention like a vortex. Once inside the painting, the eye keeps wandering, moving over to an opposite color, or looking for a repetition of the same blue. Everything is connected, yet everything is also loose and by itself. Mr. Brown succeeds in evoking a restless dynamic in a medium that is often thought of as stationary. The many hours of meticulous labor invested in getting at this result has its counterpart in the time needed to “read” and experience the painting fully. There is not one single image – there are many brought together into one painting under the pretext of depicting a figure.

On view at Max Hetzler Gallery, Berlin, untill 23 January 2021 (due to covid by appointment only) 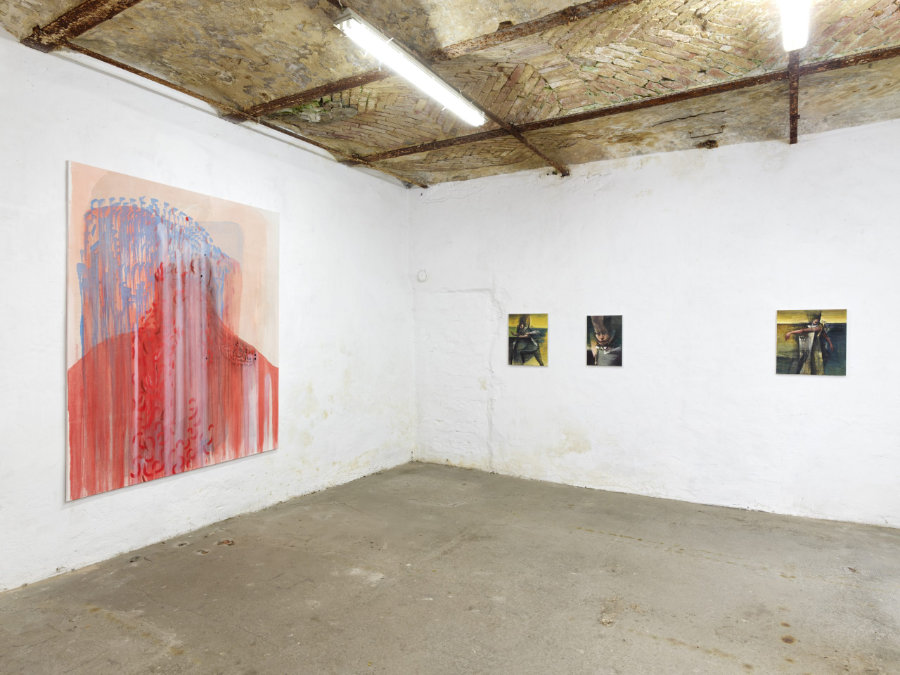 Touch is an important aspect of painting. The temperaments of the artists in this exhibition can be felt through the way they have worked and touched the canvas, be it with a firm, decisive brushstroke, a light touch to create transparency, or the sanding off of layers to create flatness or roughness. A whole range of sensibilities can be stored in a painting, speaking to us even before we identify what is actually depicted.

Though keeping distance has become the norm in public life, in the realm of paintings, we can be reminded of physical encounters and intimacy, and enjoy a close perspective. The artists in this exhibition embrace the tactile and are interested in paintings as physical matter. Yet their focus is also on less tangible aspects of the artworks, such as luminosity, wonder, or absence. The importance of light can be felt throughout a range of different motifs and vocabularies.

The works have been collected from studios on both sides of the Atlantic. Due to the pandemic, not all artists are able to be present for the opening, yet their works offer us an artistic dialogue across borders. The paintings find a temporary home in the ruinous beauty of the Kunst- und Projekthaus Torstrasse 111. Located in the center of Berlin, the space evokes the time when the city offered itself as an artistic Freiraum.

Image above: installation view with works by Rubica von Streng and Nikos Aslanidis.