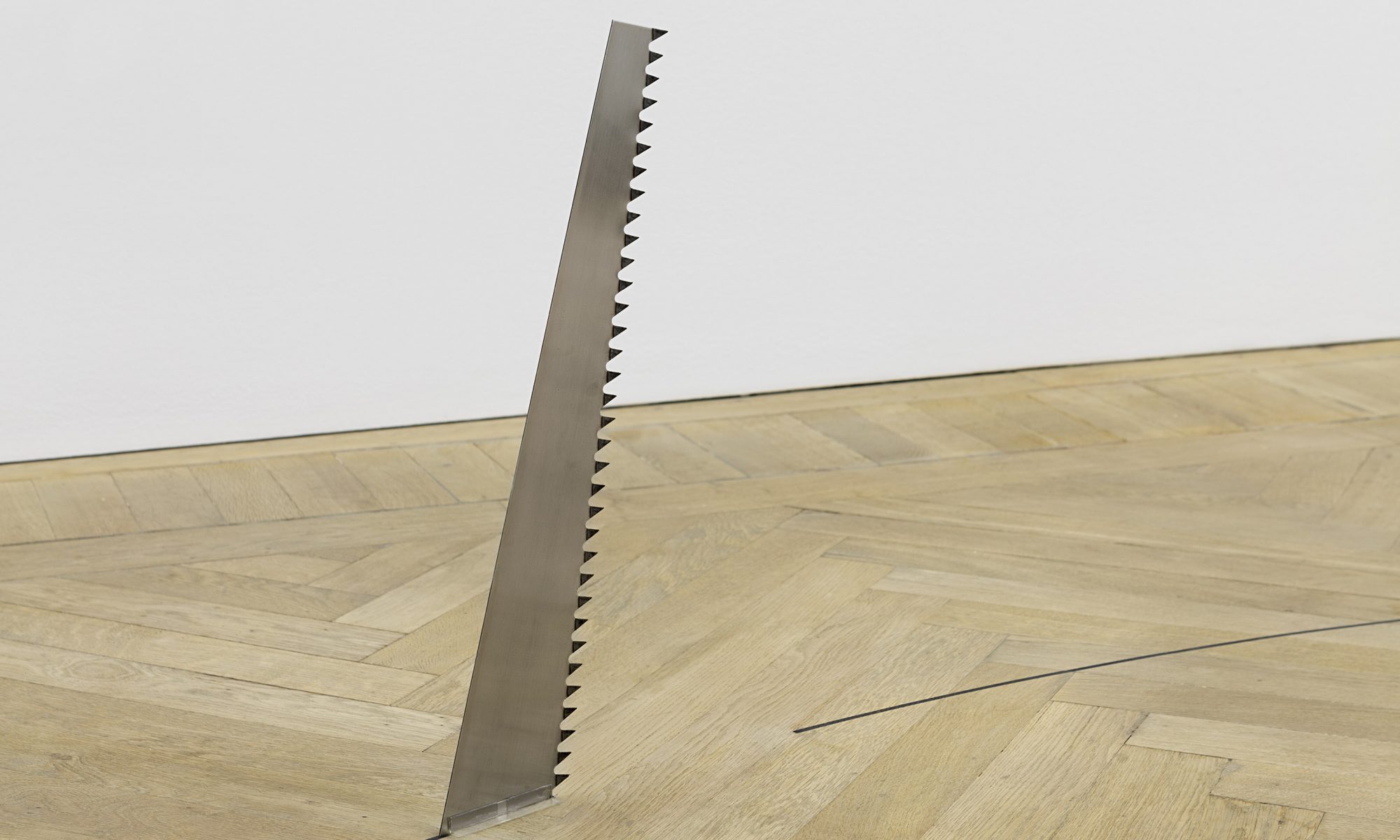 In ‘Ceal Floyer, a Handbook’, published on the occasion of an exhibition in the Kunstmuseum Bonn in 2015/16, a text about Ceal Floyer’s work is written by fellow artist Tacita Dean, who, as becomes clear, frequently dines with Ceal Floyer, and has known her for 25 years. Tacita Dean is somebody we might want to rely on while trying to get an image of Floyer, since the artist herself is not eager to give interviews. First we learn that her last name should not be pronounced as in ‘foyer’, but more like as rhyming with ‘her’. Floy-er. We are talking British, not French here. Both artist were born in England and live now in Berlin.

“It is not the fault of the goldsmith that writing about the work of Ceal Floyer is nearly pointless,” Tacita Dean notes and also: “Description kills her work because it has already taken too long.” With ‘too long’ she refers to the fact that Floyer’s work is about a quick moment of understanding or seeing something and grasping it. It is the kind of art that takes place in the split of a second, in the mind.

In the first room of the exhibition there was a light square projected on the wall, showing in the upper part the image of a light bulb, close to the ceiling, as where you usually find a lamp hanging. The image was actually produced by a bulb placed on an overhead projector in front of the wall. So the bulb was not giving any light, but rather it was a projection created by light. This work plays with perception in the tradition of René Magritte. What we see is something put together in our head, rather then what is actually there.

Floyer’s work springs from an attentive eye for objects and their formal qualities, while at the same it takes into account what happens when an object receives museum kind of attention. The artist is challenging her viewers till the point of laughter and irritation. Another work in the exhibition, Switch, shows an image of a light switch projected next to the entrance of a room, where usually the real switch can be found. The room was dark, the only light came from the projected image of a light switch. Got it?

Floyer’s work has been called conceptual and one can wonder to what extent her works are merely ideas or ‘switches’ in the mind, and to what extent actual objects and their presence are important. Clearly the light was important in some works. More physical presence has an alu ladder with only the first and last rung intact, while the ones in between have been removed. The ladder rests against a wall, waiting not to be used, you could say. According to the handbook this ladder is ‘negating its function as a tool and rendering it a purely minimalist sculpture,’ but that must be confusion over what minimalist sculpture is. It just looks like a practical joke. And the same goes for two similar versions of a photograph showing a glass that is, according to the title, either half full or half empty. That is not even a good joke. A work with more substance can be found on the floor, with a black marker an almost full circle is drawn on the wooden floor, and there is a saw stuck in it, suggesting that a circle is almost sawn out and about to fall down if you would step on it. Here the work gains some physical weight.

Floyer is playing a game with the habit of going to a museum and look at objects, to look for meaning or have an aesthetic experience. Her work is circling around expectations while looking at art, partly by mocking interpretation. But if the disruption itself becomes the main artwork, something strange happens. Once Floyer’s works are presented in a solo exhibition, as precious art works, just like those of the museum collection, they loose their credibility. They are domesticated, you could say, and this does not fit them, since it is not the kind of art you want to look at for a longer time. Once you get it, you go on to the next work. And once you are on this Foyer track, in a solo show, you know that more fooling will follow.

One work in the exhibition was called Sold. It was hardly visible since it was installed in a separate room with Georg Baselitz paintings on display. Under the right corner of a painting called ‘Sandteichdamm’ there was a small red dot. Actually it was a hole drilled in the wall that was filled with cadmium red. For those who did notice the dot, it suggested the work of Baselitz was sold, which would be a strange thing if a museum would sell out a painting. Such dots belong in commercial galleries. The funny thing though is that the Kunstmuseum did decide to sell this Baselitz painting in 2001 to the art foundation of the Sparkasse in Bonn to finance a hole in an exhibition budget. The work could stay in the museum though, since it was given as a permanent loan. Here the placement of Floyer’s work seemed adequate, since it was presented in relation to an existing artwork. On top, but this was something Floyer did not know, it pointed to an unusual episode in the museums history.

The type of art that Floyer makes forms a challenge to museums in choosing how to present and discuss it. It seems that Floyer is welcomed to mock the art world, and comment on its habits, but the art world is not yet ready to mock the artist, and find fitting ways of showing her work. The red dot was an exception: hardly visible, but in the right place. A text at the entrance of the exhibition said: “Ceal Floyer’s art is conceptual and sensual, minimal in its outlay and yet of great complexity.” The thought that this art could be simple instead of complex must have frightened the museum staff. In texts about the artist’s work, the tone is often serious, charging it up with different layers of meaning and intelligence. But is it really that complex and brilliant? And does it need to be treated as seirous as other pieces in the museum? Rather this seems an example of what Tacita Dean was warning for. If you talk too much about Floyer’s work, you might kill it. Because let’s be honest: a good joke you don’t have to explain.