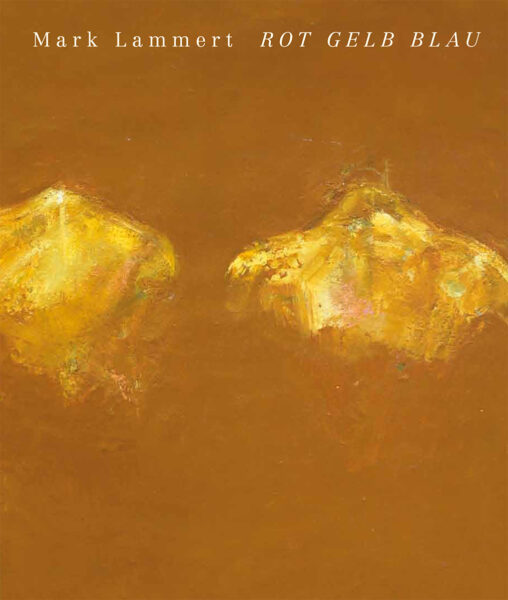 The exhibition ‘Red Yellow Blue’ by Berlin based painter Mark Lammert has reopened at the Leonhardi Museum in Dresden and is on view till 20 June 2021. For the catalog I contributed the essay ‘Light Bodies’ from which you can read a fragment here.

Mark Lammert is not the kind of artist who allows a lot of visitors into his studio. His paintings develop slowly over time; layer after layer is applied before the works are finished. Strange eyes gazing upon them during this process of making could interrupt their growth, destroy their integrity. Such is the power of sight. Yet, one could still state that the artist’s studio is densely populated, as human figures loom in many of Lammert’s paintings. Usually there are several paintings on as many easels, each work hinting at some kind of human presence. So encounters between people do take place in the studio, even if it is on a different level than that of strictly in-person visits.

To discuss Lammert’s work, one has to decide whether to start talking first about color or about figures. The two seem equally important. In a drawing-like way of painting, the human motifs develop and appear in fragments, suggestions, and gestures – not in whole bodies. A turning face, a bending back, a breathing chest. They appear on color, or ​in c​ olor one could say, as there is a vast field of one single color around them, into which they are engraved. Usually this would be called “background,” but that word feels inadequate, because it is actually the first thing that catches the attention, and much work has been spent on it; it is as layered and meaningful as the figurative motifs are, though in a different way.

The work has strong abstract qualities, but there is always at least one figure, and often several, so we are dealing with figurative painting. We can see parts or traces of living beings. “You are looking at asses,” the artist says, when he shows me one of the new works in the studio. It seems that he wants to provoke me with a banal description of a work that is delicate and hard to capture in words. Formally he might be right: we are looking at a black painting, where four figures appear bent over, and we do indeed see their behinds, lighting up in yellows and white. Yet looking at the painting did not make me think for one moment about buttocks, or any other body specifics. It is actually never the depiction of human flesh or skin that I see in Lammert’s paintings, but the transformation of flesh into painterly shapes which have their own physicality. Light bodies you could say, intangible as they are.

“A good painting should shine,” the artist once said to me. We were actually discussing the exhibition of another artist, and the question arose of what makes a painting work or not. It was clear that he used a criterion that he applies in his own studio practice. Shining is what his figures are about, and the test they have to pass, before they can leave the studio, or before a visitor is allowed to see them. First the mystery of creation has to happen; the motif has to catch fire, so to speak. And this happens through lighting. Only after that is there time for talking and polishing, editing and accentuating. The paintings give variations in glowing, in casting shadows, in glittering, and also in hiding. They can only do all of this and exist as they are when they are touched by light.